Skip to main content
You are the owner of this article.
Edit Article Add New Article
You have permission to edit this article.
Edit
Industries
Entrepreneurs
Government
Economy
Series
Subscribe
Share This
1 of 5 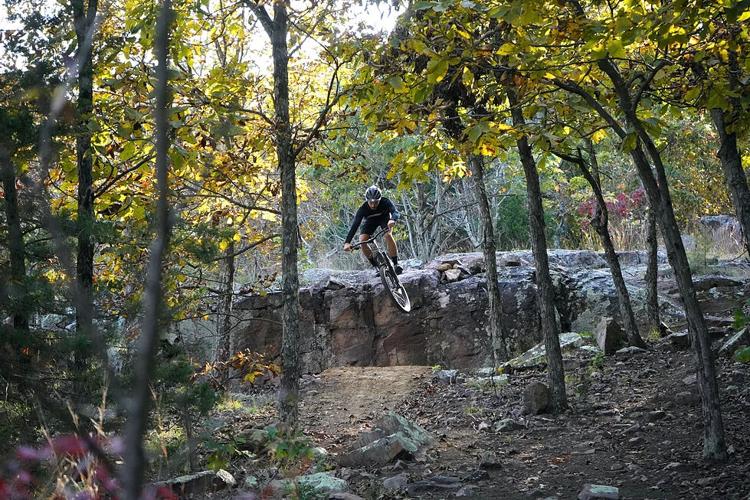 A biker rides off a jump at Shepherd Mountain Bike Park in Ironton. | Courtesy of Lacee Cofer 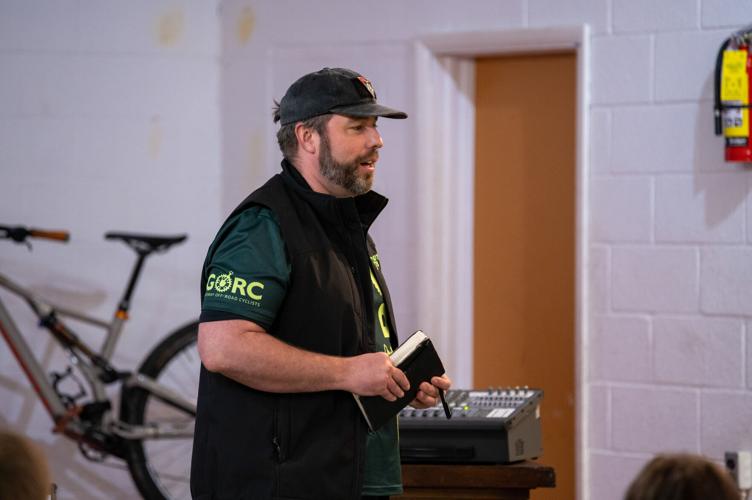 Dave Schulz, the co-founder of GORC Gravity, has been helping towns and cities across Missouri develop mountain biking trails since 2019. | Alex Noguera 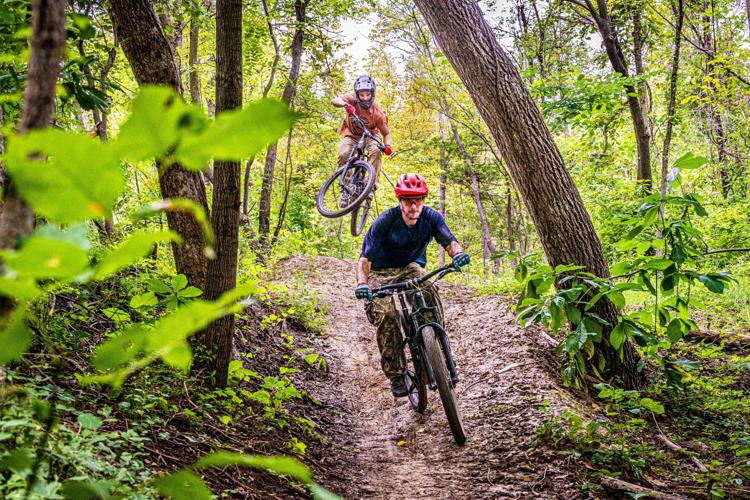 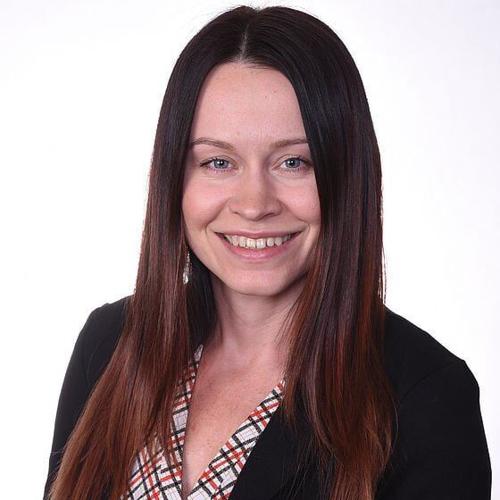 Lacee Cofer is the director of Shepherd Mountain Bike Park in Ironton. | Courtsey of Lacee Cofer 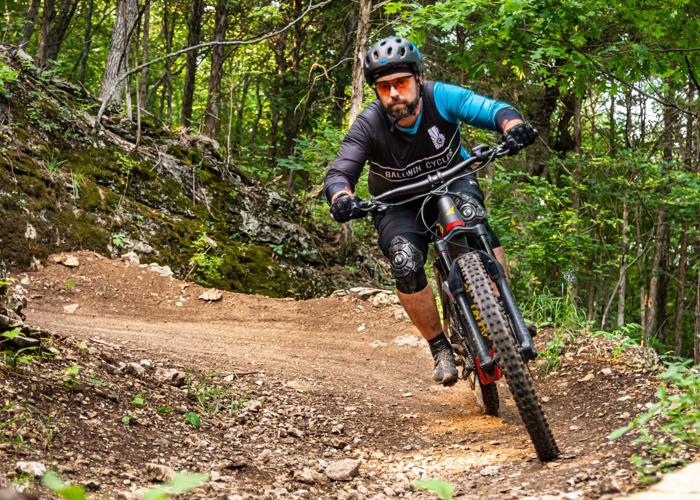 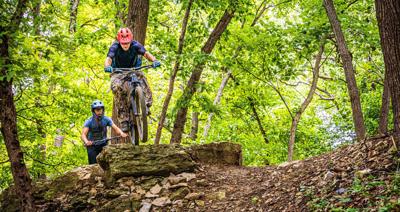 Dave Schulz keeps detailed notes of the trails he’s worked on in a small black notebook. The cover is peeling from the years of carrying it to different parks across Missouri, and he’s filled more than 100 pages with the details of the mountain biking trails he’s helped to develop.

Schulz, who formerly worked in law enforcement in national parks and is a lifelong biker and nature lover, volunteers to work with local governments and bikers to build trails. The 41-year-old does this work as part of a nonprofit he started with friend Steve Friedman in 2019 to support mountain bike park development.

At the same time, Missouri’s mountain biking scene has been exploding as more bikers hit the trails during the pandemic. Sales for traditional bikes, indoor bikes, parts, helmets and other accessories grew 75% in April 2020 to $1 billion – an unprecedented amount, according to market research group NPD. Market Research Future estimates that the industry will grow up 10% by 2027.

Quietly, Schulz has been encouraging the growth with knowledge and connections he built by studying other successful trails across the world. He’s one of a number of people organizing around the sport in Missouri.

“I think I've worked with almost a thousand people to date over the last three years – in various architectural firms, park development, volunteers, local businesses,” he said. “There's a lot of people involved in this.”

The trails are a quick and cheap way to drive economic impact in a small community, Schulz said. With a few hundred thousand dollars, cities can build a tourist destination and a backbone for businesses.

“That means that a community that is struggling can find a path to financial benefit to new business structure in a short period of time,” he said.

Small communities that formerly leaned on mining, such as Ironton and Steelville, are becoming biking destinations. Schulz’s nonprofit, called GORC Gravity, has helped six Missouri towns open parks and trail systems. And more are planned for the future.

Before he launched GORC Gravity, Schulz spent time in Arkansas studying the state’s robust mountain biking system. He wanted to learn: How can a town replicate the economic impact that places such as Bentonville and Fayetteville saw?

“They sort of jokingly – but sort of true – call themselves a mountain biking capital of the world,” Schulz said of Arkansas. “And there's a good reason for that.”

Many bikers shared the same perspective, recalling trips to Bentonville or referring to the expertise of economic development officials in the state. Biking brought in $137 million in economic benefits to northwest Arkansas in 2017, according to a study from the Walton Family Foundation, which has funded trail development in the state.

What caught Schulz’s eye is that Arkansas doesn’t have the terrain that typically lends itself to mountain biking. It’s wooded, it’s grassy – it’s Midwest topography – unlike the open spaces in the western part of the country. But in about 10 years, the state made itself into a biking destination.

It turns out, there was a process that could be replicated: By going straight to boards, councils, aldermen or mayors, presenting the economic data and connecting them directly to developers and architects, small communities could get trails going in as quick as six months – a stark difference from typical park processes, which take three to six years, Schulz said.

He co-founded GORC Gravity to aid towns and local bikers with the process. The group is an offshoot of Gateway Off-Road Cyclists, a nonprofit founded by a group of St. Charles-area bikers in 1998.

Schulz travels around the state, speaking with leaders and supporting the development – once he even stayed in a small recreational vehicle on a campground for several months, he said. He puts in the most time of GORC Gravity’s 20 volunteers, estimating he’s logged between 500 and 1,000 hours per year since the organization started. He’s able to because he has the time – he’s currently retiring from the military due to an injury.

Schulz says he has a rule: GORC Gravity must be invited to the table, rather than inserting itself. Schulz also said he will not handle money.

Funding for the projects typically comes directly from a city’s budget or economic development funds. There are also grants – which tend to take longer – and private donations that can fund projects.

The parks include a variety of difficulty levels, from regular trails to expert-level coursing. Often the first phase includes some of the more challenging mountain bike courses, Schulz said. “Instead of doing the family elements first, which is what you really tend to do, we did the more 10 to 20% of riders, the more extreme stuff first,” he said. “And the reason is that that's what gets notoriety.”

Planners have gravitated toward small towns. Take Ironton, for example. In about a year and with around $500,000, the town of about 1,400 in east Missouri was able to transform undeveloped hills into the Shepherd Mountain Bike park, said Lacee Cofer, the park’s director. The idea sprouted from local mountain bikers called the Valley Growth Initiative, and GORC Gravity helped research.

The project was funded from the Iron County Economic Partnership, which supports economic growth projects in Iron County, Cofer said. The second phase will be funded from a parks grant, she said.

Shepherd Mountain Bike park shuttles around 100 people per weekend up its mountain to access the trails, Cofer said. The park, which offers challenging jumps and ramps, was the first in the Midwest to host the Big Mountain Enduro competition, a national mountain biking tournament.

The park has helped to grow businesses in the area. Since it opened in 2021, several new businesses have opened their doors. Local sales tax revenue has increased by 16%, Cofer said. People from Arkansas and Colorado have also moved to the town during the pandemic.

“From what has grown and who has moved here and doing in-person interviews with people in the community, it can definitely be attributed to the mountain bike park,” Cofer said.

Jacob Beers moved back to his hometown of Steelville during the pandemic and brought along with him a new love of mountain biking. He wanted a trail in his town, so he started attending city council meetings.

Last year, he formed an organization to advocate for the trail. He reached out to other groups, including GORC Gravity. Together, they presented the economic data to city leaders and raised just over $110,000 during the first year.

“We put together a pretty good argument as to why we should do this,” Beers said. “Then we just started fundraising and speaking to local businesses, built a website and made it possible for individual donors to become members.”

On its opening day, the park attracted more than 1,000 people, Beers said. It was unexpected – Beers said he hoped a few hundred would show jump. “The support from the community, from all over the state and really all over the Midwest was overwhelming,” he said.

Schilling used to host competitions around the state and felt it was difficult to attract people to the northwest Missouri city. “I really didn’t feel like we were a destination,” he said. “Now I’m thinking, boy, if we would have had that years ago when I was trying to do these competitions and really trying to get that aspect of the sport going, that would have been great.”

The $3.7 million park project opened its first phase in May. It’s expected to be completed next year.

“The biking community especially was very instrumental and aggressive to get this done in a very positive, constructive way,” Kempf said.

Schulz’s nonprofit also was a big part of the process, Kempf said. “GORC Gravity's been involved from the very early stages as well,” Kempf said. “They came to the table. We had some early planning meetings. GORC was almost always there.”

One of the greatest benefits of working with Schulz was the doors that were opened, Kempf said. Kempf says he still emails back and forth with him on a regular basis.

“His networking was huge for me personally because he was able to give me names and contact information for people in Arkansas and Colorado and places that I was able to call parks directors or people that are involved in trail maintenance, and just pick their brain a little,” Kempf said.

The parks will attract nearby families and bikers. But once you build the trails, how do you keep people there?

“If you get them to stay an extra night, now you have somebody that is spending money in your restaurants, possibly shopping, definitely fuel, maybe overnight in hotels or camping,” Schulz said.

The answer, Schulz said, is peppering the area with small parks and providing trails that appeal to a wider group of people.

Another important piece, Schulz said, is keeping towns small. “We always look for small-town-type atmospheres,” Schulz said, “because that's what these tourists want.”

Some people in Ironton are worried about the growth, Cofer said. Once development started for the park, some residents were resistant. “There's some people that have just lived here for a really long time and are hesitant when it comes to things changing,” Cofer said. “You know, we've got visitors and people from all over the country that are coming to both live and visit the area.”

GORC Gravity is also hoping for a state fund specially allocated for building parks, Schulz said. The group has been working with politicians to move that forward. Lt. Gov. Mike Kehoe visited Shepherd Mountain Bike Park in July to discuss the park’s impact on the state’s tourism industry.

“Hopefully, he can help keep pushing this movement that allows us to help these areas,” he said. “We've secured over 2,000 acres now to date across the state of Missouri. Through this process, there will be perpetual free parks for the communities forever.”

This story has been updated to clarify Schulz's former job.

Skyler Rossi is the senior digital editor at Missouri Business Alert. She can be reached at srossi@missouri.edu.